About The Norwegian Forest Cat 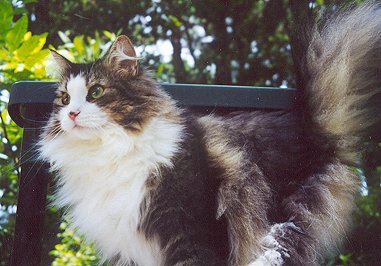 The Norwegian Forest Cat is a natural breed of cat, yet unmarred by years of selective breeding. Stalking a teaser, it is easy to see these cats capturing prey in the forests of Norway, flitting their tails and pouncing furtively from some vantage point in the brush. Every characteristic of the breed provides insight to the origin of these cats. The long, thick fur is coarse, almost wooly; it gets its unusual texture from a dual composition of guard hairs and undercoat. The fully mature cat gets a glorious coat in the colder seasons, with a truly impressive ruff reminiscent of a lion's mane. In the summer, however, this coat disappears with a fast and furious period of shedding that leaves the cats one week later with only a extraordinarily bushy tail as a hint of the winter's glory.

The Norwegian Forest Cat has a medium-long body, rectangular in appearance. They are almost always surprisingly heavy, due to thick, dense bones and heavy musculature. Females tend to be considerably smaller than males, typically ranging from 7-9 pounds; males are often 10-13 pounds. It is not unusual, however, to see a male Forest Cat exceeding 15 pounds. The cats develop slowly, reaching full maturity at five years of age. There are few things as stunning as a fully developed Norwegian Forest Cat, the dense bones and thick coat at their pinnacle.

The face of a Forest Cat is arresting. Wide, obliquely-set green or golden almond-shaped eyes give the cat its beautiful regal and alert expression. The head is an equilateral triangle in shape, with each side and the top of the head equal in length. Large ears, curved forward as though listening, follow the line of the triangle, forming a second equilateral triangle, from the points of the ears to the chin. The ears are adorned with copious long furnishings, and often tipped with small tufts of fur, called lynx tips. A Norwegian Forest Cat has a perfectly straight profile, and a strong chin.

Forest cats are at once intelligent and active, and docile and affectionate. They love to chase after toys and jump up cat trees, and can learn to open doors as early as three months. While a Norwegian Forest Cat is independent and must be allowed space, they are most fond of people. An evening alone with a Forest Cat often leads to countless "head bumps" and raspy licks, conducted from on top of or next to you. They learn from a young age how to assume positions that will inevitably lead to tummy scratches and ear rubs :)